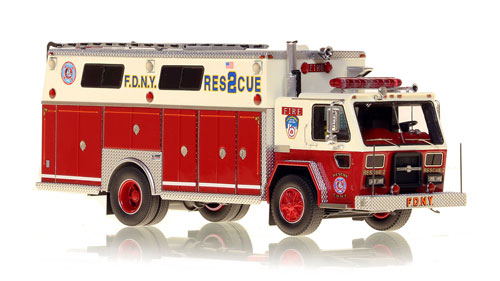 Do we assume that FDNY updated the paint job in the 1990s sometime?

Is it possible that FDNY was using a 1982 build rescue truck in June 2001? Was there a newer model?

The rig seen in the video is in fact the old Rescue 2 - 1982 American Lafrance/ Salsbury. The rig was modified by the shops and a Mack Cab was added to the rescue box. It was a spare Rescue rig and then finished its career as the Rescue collapse 2. Photo credit to Michael Martinelli. BISKET721 said:
The rig seen in the video is in fact the old Rescue 2 - 1982 American Lafrance/ Salsbury. The rig was modified by the shops and a Mack Cab was added to the rescue box. It was a spare Rescue rig and then finished its career as the Rescue collapse 2. Photo credit to Michael Martinelli.View attachment 13981
Click to expand...

I think it's misleading to call that rig an American LaFrance. While its Saulsbury box was originally mounted on an ALF chassis, I doubt that Da Shops replaced just the cab. I'm guessing they mounted the Saulsbury box on a Mack chassis. Here's what it looked like as an ALF (Pete Lund photo): dave..... maybe i misunderstood your original question.....when i answered "R*2s 1982 American La France had a Boat Mount on the roof" i was adding it to the list of Rigs that had a capability to tie down an Inflatable Boat on their Rig.....i do not know if the Rig responding from R*1 in the video above was part of the 1982 ALF after a rehab however since Mike Martinelli states it is in fact the original Saulsbury box rehabbed on a different chassis then i would say it is.........i do know the '82 ALF w/Saulsbury Body was the Rig i drove since new up until i was Promoted to LT in Aug 1987.....the Pete Lund photo Reply # 8 above (with the exception of the 2 Scaling Ladders that i mounted on the roof ) was the way the Rig was when delivered new by the Shops.....when you view reply # 3 above the Model of it in the Fire Replica model w/updated graphics & Mike Martinelli's photo that is the way it looked after modifications were made between delivery & 1985 https://www.firereplicas.com/fire-r...rescue-2-now-available-with-updated-graphics/ .....the only difference is the R 2 on the back compartment doors....they were a three dimensional cast metal Movie theater Marquee letter & number that i originally had painted white with a black outline & put on the 1976 Mack we had before the 1982.......when we received the '82 i first added the rectangular "FIRE" stickers on the sides of the panel behind the rear of the tilt cab & also one between the pair of Red Lights on the upper front of the Box.....next using eye bolts the Zodiac Boat tie down points were added to the roof as well as the two Aluminum Scaling Ladders on the roof (one Scaling Ladder was modified by the Shops with a "sleeve & a pin" in the middle....this allowed it to be carried in two pieces into a Project Elevator if need be since the old method of bringing a whole one in an elevator car extended up thru the escape hatch had been negated after NYCHA welded the escape hatches shut to prevent joyriders from climbing onto the roof of the car for "Elevator Surfing" a sometime deadly trip)......next i cut aluminum diamond plate panels as a surround to dress up the two black front tilt open vents above the headlights & below the windshield.......in mid 1985 right after we moved to 1472 Bergen St a Grand Rapids Michigan FF named Dave Smith who was also a Sign Shop owner who was a friend of Pete Martin (RIP 9-11) as they both followed the Professional Stock Car Racing circuit ......Dave did paint work on big time Pro Stock Cars & Racing Boats .....he had an interest in coming to visit the FDNY.....he offered to come to NYC for a visit & do some custom paint work on our Rig.....we drew up a plan & he said "no problem" just have a couple of cans of spray oven cleaner in the FH.....i picked him up at LaGuardia on a Sunday afternoon....he brought along two of his helpers & some toolbox's of brushes & paint's.....i drove them to the FH & after meeting the guys he & his helpers went to work spraying oven cleaner on the factory lettering.....the lettering "melted" off the Rig without damaging the body paint.... they wiped the mess away then used a solution to inert the oven cleaner then after dinner they started to do the extensive new graphics as seen in the Model & Mikes photo in Reply # 4 above.....they stayed in the FH riding with us for 3 days then Pete drove them back to La Guardia......Dave Smith became a good friend to many of us in R*2 & he later made some amazing sand blasted & hand painted signs which are displayed in the FH to this day ......he also presented some of us with a roughly 15" x 30" reflective R*2 Bulldog Patch Logo on a redwood shield....& he did a charcoal sketch both large small of me from a photo.....in more recent years Dave is RET from the FD in Michigan & is a Member of a Professional Stock Car Pit Crew........the '82 ALF Chassis was originally designed to be used with a Garbage Truck body on it.....in addition to ours there were two similar in the FDNY ....the original HazMat*1 & the last of the big Dept Ambulances (pre EMS).......unrelated but on the garbage truck issue one of 132s former Rear Mounts was purchased by a township somewhere & had a garbage truck body placed on it.
Last edited: May 28, 2021
K

Just looking at these pics makes me remember how much the rigs changed in size from the Mack/Saulsbury in 1991 to the 1996 HME/Saulsbury. Getting the 96 into Bergen St must have been a challenge compared to the 91.
D

68jk09 -- It was a 2-part question and I much appreciate replies to both parts, first to the identity of the rig in the video clip and second to rescue rigs that could mount inflatable boats on the roof of the box. You said that "using eye bolts the Zodiac Boat tie down points were added to the roof" so in theory any box could be made to carry an inflatable boat on top with a little help from the shop guys depending on what a particular FDNY company's job requirements were, and for a rescue or special rescue company that would include water rescue given that NYC's 5 boroughs all border water. In the meantime I've seen photos of FDNY 1985 Mack/ Saulsbury rescue trucks with and without eye bolts or eyelets along the top edges of the box telling me that they didn't come standard from the manufacturer (ALF, Mack, or maybe even the newer 1996 HME / Saulsbury rescue trucks in service pre-9/11).

Were the heavy rescue trucks used for Rescue Cos 1-5 on some sort of scheduled replacement time table (say, every 10 years or so) or who exactly made/ makes the decision to replace the rescue truck fleet after so many years of service? Does somebody look at cost to maintain vs. cost of buying new? Do the chauffeurs who actually do the driving and day-to-day maintenance of the apparatus(es) get together and decide? I called Mand Library and found out that the FDNY Fire Rescue fleet of 1985 Mack/ Saulsbury fire rescue trucks were replaced with brand new 1996 HME/ Saulsbury rescue trucks between December 1996 (R1-Manhattan) and July 1997 (R4-Queens). Could somebody walk me through the procurement process? Once a brand new rig is delivered to FDNY Shops, how long before that rig goes on its first official run (weeks? months?)

dave said:
Were the heavy rescue trucks used for Rescue Cos 1-5 on some sort of scheduled replacement time table (say, every 10 years or so) or who exactly made/ makes the decision to replace the rescue truck fleet after so many years of service? Does somebody look at cost to maintain vs. cost of buying new?
Click to expand...

They are on a seven year replacement schedule which is written into the union contract. The specified frontline service for all rigs as specified in the contract, it varies by type of unit. Normal replacement however currently takes a year or two past the stated replacement time due to contract negotiations, fabrication, acceptance, etc. I'm sure somewhere in the hierarchy the cost to maintain versus replacement is taken into consideration but that's not revealed it anyway.
D