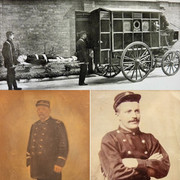 On the 5th of January 1899 Fire Based EMS was born. Saturday last the Dublin Fire Brigade (DFB) Ambulance Service celebrated its 120th Anniversary of DFB's first Ambulance case. Two crewmen aboard 'The Curlew' which was fishing off Rockabilt light house sustained injuries when a fishing net became snagged underwater & the line snapped. One of the Fishermen Thomas Smyth was severely injured & fractured both thighs (femurs). The vessel docked in Sir John Rogersons Quay, Dublin between 4-5pm where the ambulance was waiting to meet it.

Firefighters Joe Kiernan (who's great grandson is operational in North Strand Fire Station today), Tom Dunphy & William O'Brien responded. They treated the patient on scene & brought him to St Patrick Dun's hospital. Unfortunately the casualty, Thomas Smyth passed away 2 days later in hospital. Dr McAuley, the medical officer at the time gave the Firefighters first aid training & continued to do so up to the time of the revolution, after which firefighters trained with St Johns Ambulance.

Today DFB Firefighter / Paramedics & Advanced Paramedics are accredited by the Royal Collage of Surgeons. A few years later one of the Firefighters, Tom Dunphy, who responded that day was thrown from a Fire Engine and suffered a severe head injury, whilst responding to another incident. He was discharged to Grangegorman & declared insane.

He sadly died by his own hand in 1903 & there was a lengthy battle to secure a pension for his family.

Today 120 years later DFB Firefighter / Paramedics continue to battle to retain this vital service for Dubliners & to have it adequately resourced. ~ DFB Phibsboro No3 Facebook Page

Despite the service treating it's first patient on the 5th January, the service was not officially launched until 5 days later on the 10th of January. In its first year of operation the ambulance responded to 537 calls. In 2017, DFB EMS responded to 86,405 incidents.