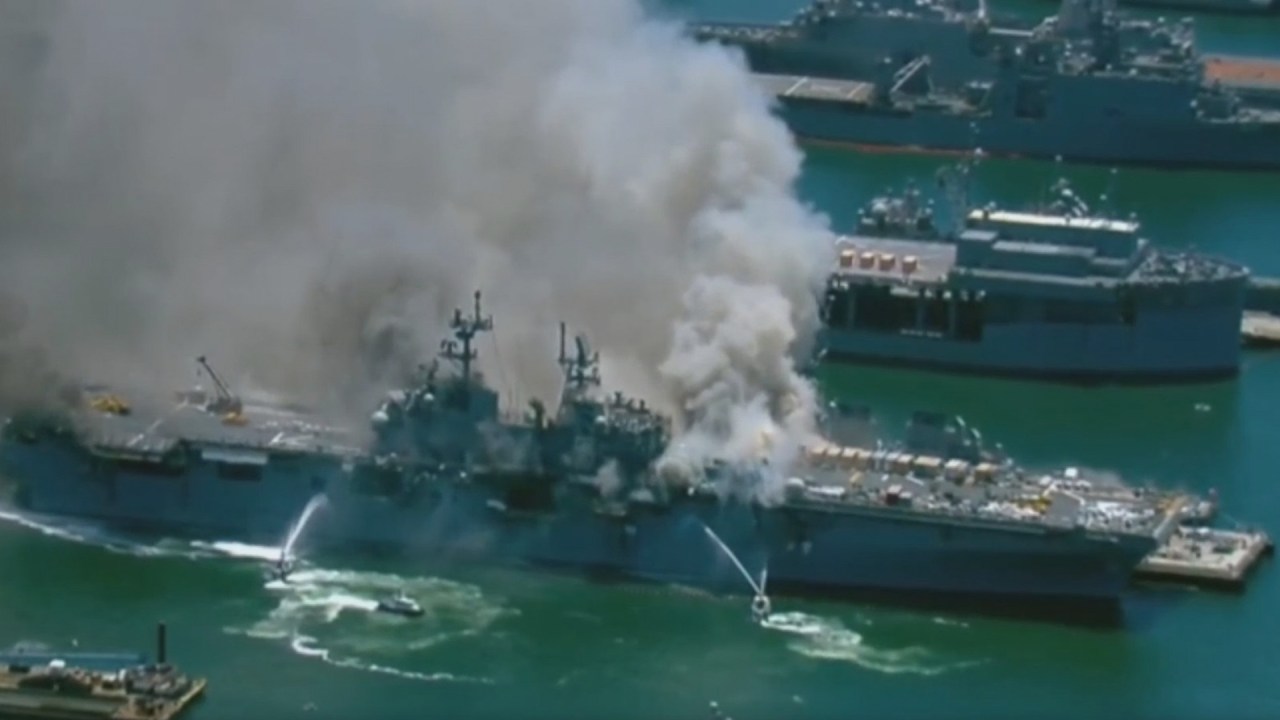 21 injured in fire aboard ship at Naval Base San Diego

A military ship fire was reported Sunday at Naval Base San Diego.

How is it that a major port city like San Diego doesnt have better marine firefighting apparatus?

I hate to see this. Can't help remembering the USS Constellation fire. Hope it's nowhere near that bad.

I'm sure they do, also, all Navy ships have a complement of firefighters trained for shipboard firefighting. However, any fire aboard a ship is extremely difficult to fight because of all the compartments, bulkheads and other separations. Also overall access very difficult in many cases.
T

Explosions on board warp steel , makes water proof hatches hard to secure. Also the heat factor not many places to vent. Picture fighting a manhole fire in the confined space of the manhole itself. Fireproof gear is just heavy no different here they must be rotating crews very quickly. Good Bless those Guys .
L

The ship is the USS Bonhomme Richard, a landing helicopter dock amphibious assault ship (what the Navy uses to deliver Marines in their theater of operations). Firefighting at the base is provided Federal Fire, San Diego (they are part of the DOD) who operate 11 engines and 2 trucks (among other apparatus). Apparently it has moved to a defensive operation and unfortunately the ship seems to be a loss.

Bulldog said:
I'm sure they do, also, all Navy ships have a complement of firefighters trained for shipboard firefighting. However, any fire aboard a ship is extremely difficult to fight because of all the compartments, bulkheads and other separations. Also overall access very difficult in many cases.
Click to expand...


What makes this fire so incredibly difficult and serious is the ship is undergoing an overhaul period. There is no way to compartmentalize the ship to cut off fire spread. At sea or normal in port the ship could set a condition onboard that would essentially lock the ship down and compartmentalize the fire area. Sailors from the ship and surrounding commands are also fighting the fire. I saw an incredible photo of a Navy on scene fire party marching in ranks on the pier headed to the ship.
F

Did they bring in San-Diego FD's large fire boat?

San Diego doesn't have a "large" fire boat. Their Marine 3 is their biggest. It has two 1200 gpm monitors, and is assigned to SDFD's Lifeguard Division. photo courtesy capecodfd.com

raybrag said:
San Diego doesn't have a "large" fire boat. Their Marine 3 is their biggest. It has two 1200 gpm monitors, and is assigned to SDFD's Lifeguard Division. photo courtesy capecodfd.com
View attachment 3752
Click to expand...

The Navy tugs which have been seen in various photos and videos of the incident on the other hand, each have two 2,000 gpm Stang monitors, so they have more fire fighting capability than the SFFD boat.
Photo by Navymailman.

NYBravest82 said:
How is it that a major port city like San Diego doesnt have better marine firefighting apparatus?
Click to expand...

Major port cities with a large US Navy presence use Navy resources for mutual aid. (San Diego, Bremerton, Norfolk)
The city of San Diego has not had a large fireboat for many years.

Appears that ship fire suppression system was still turned off for maintenance - even though ship has been undergoing maintenance in port since 2018.

Also, appears that on-board Navy fire crew tried to handle fire initially and then called in SDFD and federal firefighters.

"The fire suppression system had been turned off because it was being worked on as part of the ongoing maintenance. The system uses Halon, a liquefied, compressed gas that disrupts a fire and stops its spread by cutting off its oxygen.

Sailors on board and from the pier doused the blaze until it grew too large and they had to retreat. Local and federal firefighters were called in, and an explosion caused by pressure from the heat prompted the evacuation of all 160 people on board, Sobeck said."

San Francisco as well as Los Angeles have large fire boats, it would be a long run but I'm almost surprised at least the one from LA hasn't been requested. I believe it's quite similar to the 2 large boats that FDNY has.

Fire was declared out today, but all personnel were removed from the ship due to its dangerous list (probably due to fire fighting water). 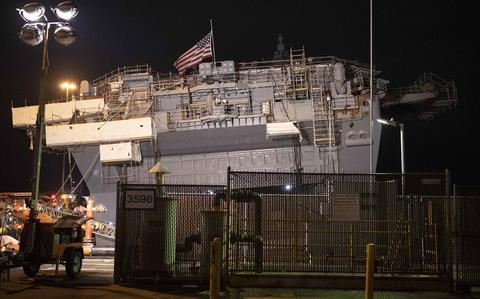 Firefighters temporarily evacuated the USS Bonhomme Richard overnight Wednesday as a safety precaution when excessive amounts of water used to fight the fire caused the ship’s tilt to worsen, according to the Navy. 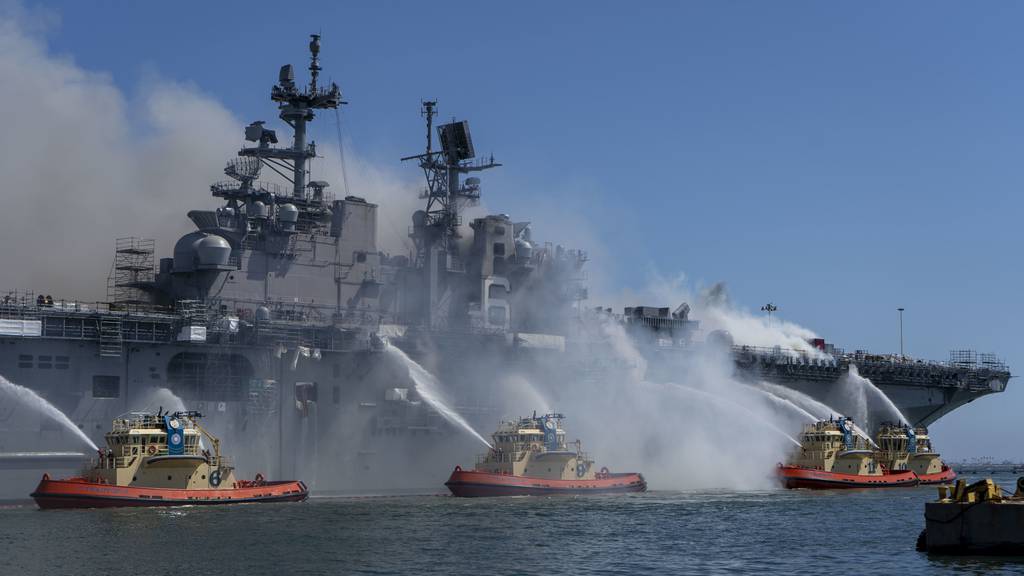 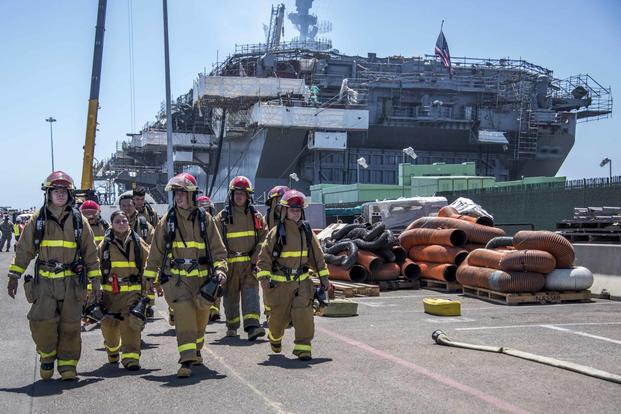 All Fires on the Bonhomme Richard Are Now Out, Navy Says

Incidentally, stopped by San Diego last year on the way to Phoenix, took the river tour and all of the naval yards. Found it to be a beautiful city and the two SDFD stations we stopped by for photos were great guys.
You must log in or register to reply here.
Share:
Facebook Twitter Reddit Pinterest Tumblr WhatsApp Email Share Link
Top