Continue to rest in peace and you will never be forgotten.
1

Continued Rest in Peace to Harry Ford, Brian Fahey and John Downing. Continued thoughts and prayers for their families at home and on the job.
N

We will NEVER FORGET that Father's Day. A very sad time for the families and the members of the FDNY who lost Three of their Brothers.

Then after going through such a very sad and tragic time, who would expect even MORE tragedy to hit the FDNY in less than Three months later, on September 11, 2001.

May They Rest in Peace.
F

Continued Rest in Peace to these fine gentlemen. Continued prayers and comfort to their families.

The FDNY was going through some tough times back then, there was a period where it seemed a firefighter or group of firefighters were killed every few weeks, I recall it was a dark time...On Fathers Day, 2001 I remember going into the firehouse, I was detailed to  L 10 and I got in early. The Brothers were gathered around the department radio in the housewatch listening to the Queens job, we could tell something bad was going down. Later we heard the 5555 for the three brothers Harry, Brian and John. I also found out my good  L 38 buddy, now, Capt Brian Hickey R4 broke his leg at this job inside the hardware store basement when the store exploded he was injured. We said at the housewatch fateful words..."What could be worse than this..."

Continue to Rest In Peace Brothers. A truly sad day in our jobs history.
M 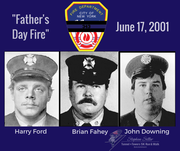 God Bless Those Who Serve; and Those Who Mourn. Continued Rest In Peace.

May they continue to Rest in Peace
M

RIP Brothers, Glad there is a legacy!
F