Decades before The Bronx neighborhood of Morris Park came to be, it was home to the 360 acre Morris Park Racecourse which ran from 1889 until 1904 as an important center of American thoroughbred horse racing which was the home of the Belmont Stakes from 1890 until 1904 and even saw the famous Preakness Stakes in 1890.

The 1 1/4 mile track was bounded by what is today Sacket Avenue, Williamsbridge Road, Bronxdale Avenue, and Pelham Parkway and by 1902 attendance was no longer what it once was and a decision was made to shut down the track which saw its last horse race on October 15, 1904. 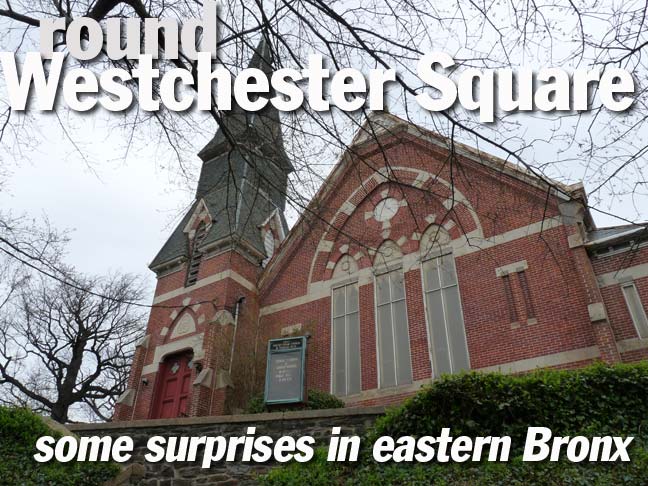 Though this was the first time in awhile, while writing Forgotten New York the past 15 years I have frequently found myself in Westchester Square in the Bronx. The neighborhood… Fireman Samuel McMahon of Engine 56 was exercising the company's horses with the tender. Somehow he was run over by the horses and wagon and received internal injuries. He was taken to the 99th Street Hospital where he died three days later. He joined the Department in 1883. He was twenty-seven years old, married and the father of two children. (From "The Last Alarm"

While speeding to a bus fire at Riverside Drive and West 94th Street, Engine 56 collided with a motorcycle at West 83rd Street and West End Avenue. The motorcycle was heading south on West End Avenue as Engine 56 made the turn from West 83rd Street. In avoiding the motorcycle, the engine hit the curb, throwing the men on the back step off the rig. Firemen William Moran and James O’Dwyer died from fractured skulls. – from "The Last Alarm”

While speeding to a bus fire at Riverside Drive and West 94th Street, Engine 56 collided with a motorcycle at West 83rd Street and West End Avenue. The motorcycle was heading south on West End Avenue as Engine 56 made the turn from West 83rd Street. In avoiding the motorcycle, the engine hit the curb, throwing the men on the back step off the rig. Firemen William Moran and James O’Dwyer died from fractured skulls. – from "The Last Alarm”

In 1895 The New York Times ran a three-page article on the Upper West Side with the headline “West Side Is Itself a Great City.” The newspaper recalled “It will be seen that by 1882, when building operations began on an extensive scale, the State and the city and the individual property owners, singly and collectively had secured for the West End everything that would make it the most healthful, the most beautiful in its location, and the most comfortable part of the city in which to reside.”

This rapid development following the Financial Panic of the 1870s resulted in the need for new police stations, schools, and fire stations. The City scrambled to keep up, as did Napoleon Le Brun. In 1879 Le Brun became the official architect of the New York City fire houses. A year later his son Pierre joined him in the business, creating the firm N. LeBrun & Son. Their fire house work focused as much on design as function and each one of the resulting structures was a visual pleasure.

In 1888 the firm began work on the station house for Engine Company 56 at No. 120 West 83rd Street. The five-story firehouse was completed the following year—a masculine mix of Romanesque Revival and Renaissance Revival elements. Typical of firehouse design, the truck bay was flanked by a door and a window matching in proportion. Le Brun decorated the bay with medieval motifs and surrounded it with hefty brownstone blocks.

Two stories of red brick were separated from the fourth by a stone bandcourse. Stone piers—like engaged colunettes--ran up the sides and curved gently into the brickwork. Their rounded form was echoed in the bull-nosed bricks that softened the corners of the openings. The fourth floor vied for attention with its single arched opening, accentuated by a lushly-carved eyebrow and broken cornice. The top story hid behind the ambitious gable as a slate-covered mansard.

Captain Michael J. McNamara was put in charge of organizing the new Engine Company. Born in Ireland in 1849, his family brought him to America when he was still an infant. He joined the Fire Department in 1873 and had been promoted to Captain on December 1, 1886, just three years before the station was completed.

He filled the open positions with two engineers, James Claire and William Massey; and seven firefighters: Michael Dinan, Charles Calahan, Robert Geddis, Richard Hyde, William Lumbolster, John Linck and John Douglass. Engine Company 56 and the other new Upper West Side houses helped out with blazes throughout the city. The Times noted “They do not ‘run’ to every fire. But a second or third alarm finds one or the other responding to it.”

Such was the case on the Fourth of July 1898 when, as reported in The Times, “The energies of the Fire Department were taxed to the utmost yesterday in answering the frequent calls to fires in all parts of the city, due generally to the careless handling of firecrackers or other explosives.” The Lenox Livery Stable on East 75th Street was in flames and when the third alarm was sounded, Engine Company 56 responded.

In the 19th and early 20th century, getting to the fire was often as dangerous as fighting it. Engine 56 would not make it to the Lenox Livery Stable that night. Its horse-drawn truck sped through Central Park to the East Side. “At Madison Avenue the engine got between two underground trolley cars and was overturned. The driver was heavily thrown but not seriously hurt.” Captain McNamara was seriously injured, including a broken left leg and was taken to the Presbyterian Hospital. “The engine was disabled,” reported the newspaper.

McNamara recovered and returned to the job. In 1905 he received the New York Daily News medal as the city’s most popular fire captain—receiving a landslide 800,000 votes compared to the second place 300,000. The newspaper said “every man, woman, and child on the upper west side knew him and were fond of him, especially the children.”

A year later, William J. Sullivan was assigned to Engine Company 56. On May 8 that year he and another firefighter, John J. Sheridan of Engine Company 39, were off duty and walking together along Third Avenue. In the four-story building at No. 1224 was the bakery of John Storck, whose family lived in the apartment above. Just before the firemen arrived, a breeze pushed a curtain into a burning gas jet, setting it on fire.

The blaze swept rapidly through the apartment, noticed by Sullivan and Sheridan from the street below. They rushed into the building, saving at least six residents. John Storck was asleep and Sullivan had to break into the locked door. “Picking the aged man up, they dragged him into the hallway just as the flames broke through into the bedroom, and carried him downstairs into the street,” reported The Times.

Just as a fire engine pulled up, Mrs. Pollock, who lived on the third floor, implored Sheridan to “Save my baby!” Sheridan ran back into the fire and smoke engulfed building. On the third floor he found a fox terrier, which he grabbed up, then crawled through the smoke until he felt the body of an infant in a chair, wrapped in a blanket. Just as the flames broke through the flooring, he “beat a retreat” to the street, cradling the baby and the dog.

Once on the sidewalk he realized that “my baby” was the fox terrier. The infant he had rescued was a baby doll. “That’s one on me,” Sheridan said.

In 1907 the City commissioned architect Edward L. Middleton to make “improvements” to Engine Company 56. His updating was confined to the interior, leaving Le Brun’s façade untouched.

After 22 years in command of Engine Company 56, Michael J. McNamara retired on February 1, 1911, the longest serving captain in the Fire Department. A dinner in his honor was held at Healy’s restaurant, attended by the Fire Commissioner Rhinelander Waldo and other City officials.

At the time of McNamara’s retirement, an idea had surfaced to alleviate the boredom of firefighters sitting in their station houses with little to do other than wait for an alarm. By 1912 a “traveling library” was instituted by the City that provided books to the station houses. That year a report noted that Engine Company 56 had gone through 383 volumes.

The motorizing of fire trucks did not necessarily alleviate the danger of the crowded Manhattan streets in responding to fires. The call to a blaze at 94th Street the Riverside Drive on the night of June 29, 1926 ended tragically. Engine Company 56’s truck was speeding along West 83rd Street, its bells sounding, as Henry Nolan drove his motorcycle south on West End Avenue.

“Nolan did not hear the clanging gong of the fire apparatus in time to avoid the accident,” reported The Times the following morning, “although both he and the driver of the truck made valiant efforts to avoid a collision.”

Firefighters were riding on the sides of the truck. As the motorcycle hit the fire truck, it became entangled in it and was dragged almost to Riverside Drive before the apparatus could be stopped. The jolt when the truck hit the curb as its driver, Fireman Mathew Moran, tried to avoid the collision, sent the six firemen hanging onto its sides flying onto the pavement.

Fireman William L. Moran died in Roosevelt Hospital of a fractured skull. Three others also suffered fractured skulls; Joseph Cunningham’s face was so badly damaged that he was removed to Reconstruction Hospital; and the others received serious lacerations and injuries. The motorcycle driver received a fractured skull, as well.

With World War raging in Europe in 1940, the United States sought to beef up its military. Frustrated Army recruiters found that a large percentage of New York City men were unfit for service. On November 26 four Army induction centers examined 415 men. They reported “nearly one-fourth of the selective service men from New York City and its environs examined yesterday for induction into the Army were found to be physically incapable of military service.”

Among those examined was 27-year old firefighter Arthur Papp of Engine Company 56. He was fit; but Fire Commissioner John J. McElligott fought his induction. McElligott filed a claim “for occupational deferment” saying Papp “was more useful to the community now as a fireman than as a soldier.”

Colonel Arthur V. McDermott, the director of the New York City selective service, was little moved. He explained to the press “that nobody—not even men in services as essential as those of the fire and police—would obtain blanket deferments of service.” Papp’s case was submitted to the local board for consideration.

Their decision did not take long. On November 28, just two days later, it announced that Fire Commissioner McElligott’s request “has been rejected.”

By 1944 Engine Company 56 added another function when a Fire Department surgeon, Dr. Harry M. Archer, was brought on staff. The Company now did ambulance runs as well.

The 83rd Street station became Engine Company 74 when that company moved from its old home at No. 207 West 77th Street. The everyday valor of firefighters was tragically displayed when the Company lost six of its men--Matthew Barnes, John Collins, Kenneth Kumpel, Robert Minara, Joseph Rivelli Jr. and Paul Ruback--in the attack on the World Trade Center on September 11, 2001.

Le Brun & Sons’ charismatic firehouse survives on an architecturally eclectic block; a snippet from a time when the Upper West Side was considered by some as a “great city” in itself.