Looks like Ken had one slice and Willy D woofed down the rest of the pie.


Don?t ask permission, ask forgiveness: The USMC pilot who ?borrowed? a helo to end a sniper situation has died

Lt. General Charles "Chuck" Pitman passed away this past Thursday at age 84. His career spanned over 40 years, including three combat tours in Vietnam. He also was involved in Operation Eagle Claw, the attempted rescue of the American hostages in Tehran in 1980. He commanded an Air Wing and was the Deputy Chief of Staff for Marine Corps Aviation. He earned the Silver Star, four Distinguished Flying Crosses, a Bronze Star and a Purple Heart. But for all his achievements in uniform, Pitman is better known for ignoring military protocol and breaking a bunch of regulations so he could save lives.

That was the thought process of then, Lieutenant Colonel Pitman. On Jan. 7, 1973, Pitman was the commander of the Marine Air Reserve Training in Louisiana. Pitman had turned on the television to see a horrible scene unfolding. A gunman had taken position on top of a hotel and was shooting and killing police officers. The sniper had a full view of all on comers, and any attempt to enter the hotel was met with murderous gunfire.

Pitman didn't even think twice about asking permission to help. He grabbed another pilot and two crew members and jumped in a CH-46 Sea Knight helicopter and headed toward New Orleans.

The incident Pitman was flying into actually started several days earlier on New Year's Eve. Mark Essex was a Navy vet who had been kicked out due to behavior issues. He had ended up in New Orleans, where he fell in with radical groups. One of those groups was the Black Panthers. Essex had grown angrier over time with what he perceived to be injustices he faced in the Navy and now as a civilian. After learning of a civil rights protest in which two students from Southern University were killed by police, Essex lost it.

He went to New Orleans police headquarters, where he shot and killed an African American cadet; shooting him from behind. He then fled and tried to break into a warehouse. When police arrived, unaware that he was linked to the shooting at HQ, Essex ambushed them, mortally wounding one. By the time backup arrived, he had vanished into the night.

Essex had set an ambush. The shooting and fires would draw first responders to the scene. Then he would carry out his horrible plan to kill more cops.

As the police and firefighters arrived, they attempted to enter the hotel. Essex killed three police officers and wounded several more. He was able to pin down anyone that attempted to move toward the hotel and was completely concealed from return fire by concrete barriers on the roof.

By this time, the TV cameras had shown up. Broadcasting over the airwaves, they told viewers of the horrible situation unfolding in downtown New Orleans.

One of the viewers was Lt. Colonel Pitman.

Pitman flew the CH-46 toward the hotel without any idea what he was actually going to do. He just knew he had to do something. When he arrived on site, Pitman located an empty parking lot next to the hotel. He landed, headed to the command center, and quickly became apprised of the situation. The cops on the scene sought his advice, and his years of service in Vietnam kicked in. Essex had the high ground, so Pittman would go higher.

He put several New Orleans police officers on the helicopter and took off. He started flying passes over the roof of the hotel, slowing down and turning so that the police could get a good shot. They could not. Essex would take shots at the aircraft from afar but would take cover the minute they closed in. Pitman noticed this and kept making passes to lure Essex into thinking this was his routine. Finally, after one pass, he turned immediately around and caught Essex in the open. The police in the helicopter unloaded on the sniper.

When all was said and done, Essex was found with over 200 rounds in his body.

Pitman was lauded as a hero by the police and citizens of New Orleans and just about everybody...except the United States Marine Corps.

It turns out that Pitman (kind of? sort of) violated a few rules and regulations when he took the helicopter. He wasn't allowed to use military personnel or aircraft for anything other than a rescue mission (like evacuating flood victims).

You would think that the Marine Corps would look at the badassery that Pitman just pulled off and call it a public relations coup. But, they didn't (of course) and started the process of a court-martial.

It was only due to the intervention of Democratic Congressman and House Armed Services Committee Chairman Edward Herbert that the issue was dropped.

Pitman would continue his amazing career, retiring in 1990 as a Lt. General.

THANK YOU to all the members here who took the time to send my Ole' Buff Buddy, WW II Vet., Ken Kelly, a Happy Birthday card as he celebrates his 96th, today February 23rd.

Kenny, was "amazed" that guys, who were somehow a part of the FDNY and other fire depts. (active, retired, buffs) would do that for him.

I have known Kenny for about 45 or 50 years. We chased the FDNY during their "War Years" and into their busy 80s and 90s. Probably in some of the most dangerous streets in NYC.

Thanks Brad for posting those latest pictures for me. That hat he's wearing (Engine 235 - Bed Sty) fits him and his character perfectly. An FDNY member gave him that awhile back.

I hope to see him today (Feb 23) to help celebrate his HAPPY BIRTHDAY. I think he wants to get a Pepe Pizza in Fairfield, Ct.

Those latest pictures of Ken Kelly, were taken about one week ago. Today, February 23, he is 96 years old, a former WW II Vet".

VIETNAM MOH RECIPIENT KILLED BY VIRUS........      REST IN PEACE SGT MAJOR .....THANK YOU FOR YOUR SERVICE....PRAYERS FOR THE COMFORT OF THE FAMILIES ......Medal of Honor recipient Bennie Adkins loses battle with coronavirus at 86
By Robert Gearty | Fox News


Medal of Honor recipient Bennie Adkins of Alabama has succumbed to the coronavirus after a long battle.


The Vietnam War hero was 86 when he died Friday.

?We are deeply saddened to notify you that after a courageous battle with COVID-19, Command Sergeant Major Bennie G. Adkins departed this life today, with beloved family at his bedside,? according to the foundation that bears his name.

Adkins had been hospitalized in critical condition at East Alabama Medical Center after being diagnosed with COVID-19, the disease caused by the coronavirus, in late March, according to the Birmingham News.
CORONAVIRUS STRIKES MEDAL OF HONOR RECIPIENT ? WHOSE STORY IS A REMINDER OF DUTY AND SERVICE

He deployed to Vietnam three times, his heroic efforts in one 1966 battle later recognized in 2014 with the awarding of the Medal of Honor. His Medal of Honor citation in part reads:

?During the thirty-eight hour battle and forty-eight hours of escape and evasion, fighting with mortars, machine guns, recoilless rifles, small arms, and hand grenades, it was estimated that Sergeant First Class Adkins killed between 135 and 175 of the enemy while sustaining eighteen different wounds to his body.?

?Sergeant First Class Adkins? extraordinary heroism and selflessness above and beyond the call of duty are in keeping with the highest traditions of the military service and reflect great credit upon himself, Detachment A-102, 5th Special Forces Group, 1st Special Forces and the United States Army.?

At the time he was awarded the Medal of Honor, Adkins told a news conference at Fort Benning that he couldn?t accept the honor alone, according to the Duncan Banner, an Oklahoma newspaper. Adkins was orginally from Oklahoma.

?What I attribute this to is not my actions, but the actions of the other 16 Americans that were with us in the battle of Camp A Shau and the five Americans that paid the ultimate price,? he said.

He was also quoted as saying, ?The bottom line is that it was just not my time (to die) that day.?

His son Keith Adkins told the Opelika-Auburn News on Friday that the family was so proud of the hospital staff at EAMC.

?They worked so hard ? for everybody, not just him. He was in there for three weeks, and they never quit working on him,? he said.

He said his father should be remembered not just for his heroism in Vietnam.

?We want his legacy to not only be his life in the military, but what he did afterwards; how he went on to school, gained an education, started a local business, and especially his support of the community,? the son said.


Adkins is preceded in death by his wife, Mary Adkins, and is survived by one daughter and two sons, as well as many grandchildren and great-grandchildren.

With the United States Navy ships "Comfort" in New Your City and the ship "Mercy" in Los Angeles, the U.S. Navy Band presents a song for you.

Thank you for letting us enjoy this, Bill.  God knows we can use some up-lifting at this point.  There's a report on the news right now that the Stony Brook VA facility has the highest death rate on Long Island.

To you, Bill, and all Members of The Site - Stay Safe and use Common Sense. God Bless Those Who Serve, Have Served, and Sacrificed on behalf of This Great Nation. Peace and Comfort
to Those Who Mourn.

May our Honored Military that gave their all "NEVER WALK ALONE".....Les Cauchi a fellow Vietnam Veteran on the right of Johnny Maestro ....REST IN PEACE TO BOTH....
N

When one 95 year old World War II veteran in Woodbridge, NJ was asked; "What Memorial Day is all about", he said: "LOVE YOUR FREEDOM".

THANK YOU to ALL of our U.S. Military Veterans for all you have done and given up for us. 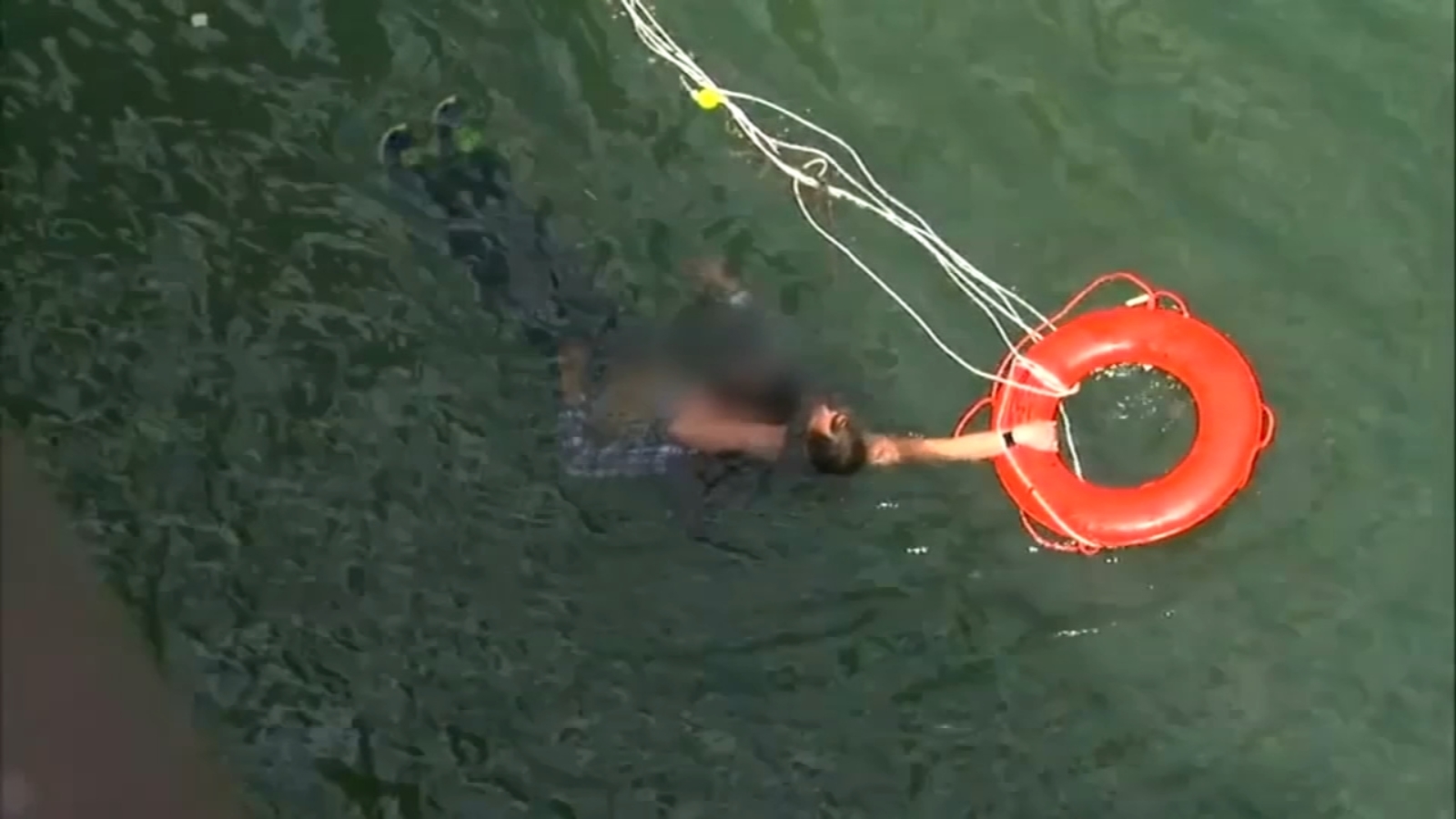 Julie Macholz happened to be walking her dog Toby Thursday afternoon when she heard a commotion, which led to her jumping into the Chicago River to save a man's life.