TACTICAL USE OF FIRE HYDRANTS.

Good article, I like the tip about the tin foil

Before the 20' soft connection, An Engine up on the sidewalk, like this picture, was a common sight.

Had the pleasure of working with Andy when he was with Squad 18. We had a small taxpayer job on W 8th Street off Sixth Avenue. All hands operating when we hear this "KABOOM!", everyone looks at the direction of the kaboom...Andy literally "hit the hydrant" with front right wheel of the rig blowing the tire...RIP Andy, fine man!

Explosion and fire in scrap yard on Boston Road

Atleast they opened the doors! ;D 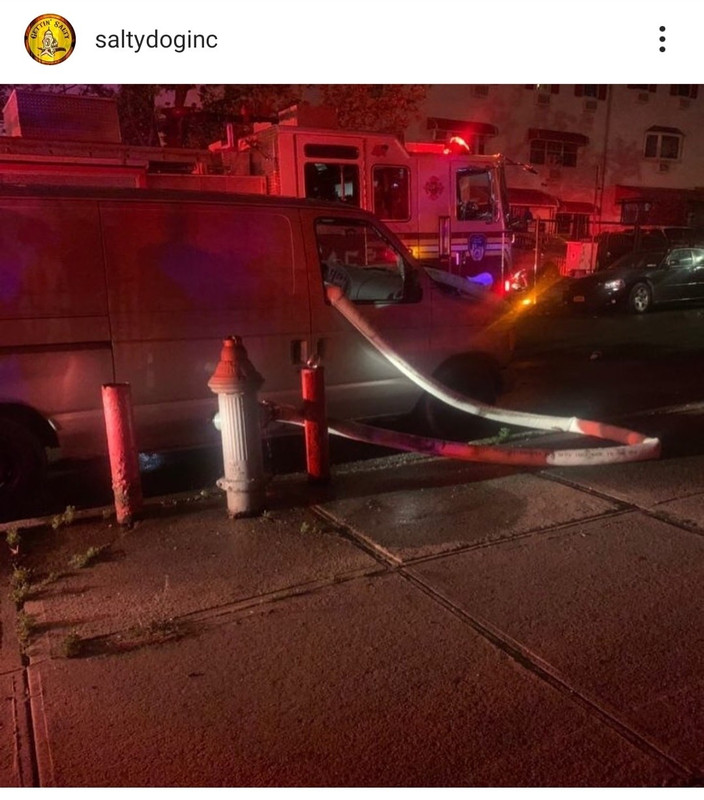 While I agree in many cases there is good reason to run a hose line thru a vehicle this doesn't appear to be 1 of them. The hose would actually be straighter and easier to run if it had gone in front of the vehicle. In this case it appears hose was run thru the van just as a matter of spite.
N

Maybe what should happen is NOT only post this on this web site, BUT on newspapers and news media across the country.

Explain to those who might think about blocking a fire hydrant that this is what could happen the next time you decide to park in front of a hydrant.

Let them also know, how important it is to make sure a fire hydrant is readily accessible.

Also that any damage that is caused to the offending vehicle is NOT the fire departments fault, but the owners fault for doing so. For being so selfish and having NO Concern that their neighbors apartment or house burns. Or worse if that water is used to provide a line, in order to make a life saving rescue of someone trapped inside.

Plus advise through the news media that their vehicle will be towed at "their" expense, as well as issued a traffic ticket for the violation.

Something else that might be considered. Should an additional delay be caused in extinguishing this fire, causing it's spread and/or injures, the driver of this vehicle could also face a legal lawsuit by the owner or occupant.

Point is, the owner of this vehicle "might" have a lot more to worry about rather than just a few broken windows.
E

No, this is not spite. Psychologists refer to this as operant conditioning.

entropychaser said:
No, this is not spite. Psychologists refer to this as operant conditioning.
Click to expand...

Call it what you want but it probably took more time to do that and it would have to take hydrant line around the front of the vehicle in this case.

Fire in an attached private dwelling at 24-25 42nd Street