WTF are these ass's for real ? ....why give out info on surveillance ?.....too many hacks on the City Council for too long...    www.nydailynews.com/new-york/nypd-officials-bill-terrorists-dodge-surveillance-article-1.2986286

This would be hilarious if it wasn't so deadly.  It's amazing how much can be forgotten in fifteen-and-a-half years.

EXCELLENT LETTER FROM THE SBA....  http://www.foxnews.com/opinion/2017/07/07/de-blasio-blasted-by-nypd-union-protests-and-progressive-politics-more-important-than-police.html

I believe the term is still SCUMBAG!
N

I can NOT believe that the mayor of our largest city is leaving it at such a terrible time. People across the country have seen what happened to a member of the NYPD just for wearing the uniform and sitting in her police vehicle. She was assigned there to protect the good people in one of the highest crime areas of the city.

The people of this country also saw when two other members of the NYPD were shot and killed in the same manner in Brooklyn. And some of us remember how the mayor had told his young son to stay away from the police and not trust them. Some of us also remember when the members of the NYPD, as well as thousands of other police officers turned their back when this mayor spoke at that funeral. He deserved what he got and I know if I was one of those officers, I'd turn my back on him too.

To every one of those newest members of the NYPD, you have the respect from all the GOOD, DECENT People of this country for the job that you are about to begin. I wish you all a happy and safe career. THANK YOU for your willingness to put your lives on the line for each and every one of us.
B

The Mayor has to let the police do there jobs and not tiring there hands.

Just finished reading about this NYC Mayor in our local newspaper - 100 miles away.

He is getting quite a reputation from even people who never knew his style before. I base that on a few comments that have already been posted in that newspaper. Some telling him NOT TO COME BACK.

I'm usually not too good at giving about 7or 8 million people advise. But in this case I got to try. "You Guys got to get rid of This Guy".
M

It just shows what NYC has turned into. He was elected by it's inhabitants. That goes to show that "they" want a "Sanctuary" city where anything can be done with very little fear of responsibility on their part and the continuance of the "me" mentality where one can get everything for free, let the handouts and giving continue and again no fear of repercussion for crimes and other once illegal activities. It is clearly obvious that the NYPD is spat upon, not only by the miscreants but also figuratively by the politicians who run the City while they collect their lavish salaries and kickbacks. There is no respect for any uniformed service, be it FD,PD,EMS, etc. anymore. It's just what you can do for me when I want it. Absolutely incredulous what "The Big Apple", aka "Fun City" (as former Mayor John Lindsay dubbed it) has become and only enhances the movie title "Escape From Manhattan."
When the hell are people going to wake up, then again, the only ones that will be left there are the aforementioned leeches of society. Sorry for the ranting, but as many of you here, we worked for and gave our all for years to what was once "The Greatest City In The World" (the late DJ Ron Lundy of WCBS-FM 101.1)

The idea of building walls around some of our cities is becoming more and more attractive...

jks19714 said:
The idea of building walls around some of our cities is becoming more and more attractive...
Click to expand...

wilhelm built a wall around Gracie Mansion after he moved in.

New York City is experiencing an accelerated, steep decline in quality of life. NYC now has the highest homeless population in the country. It has spiked by about 50% under the leadership of ultraprogressive Mayor Bill de Blasio. Homeless people are all over the place, living in squalor, very commonly panhandling passersby,  making them feel quite uncomfortable, and committing lots of crime. Many of these people are mentally and physically ill and need serious assistance.
Recently, NYC decided to no longer arrest or prosecute for public marijuana use, as well as for public urination. Even public drunkenness has been decriminalized under de Blasio?s lead. NYC police are now under order not to break up excessively loud parties, and stop and frisk police arrest policies have been put out of business.

In short, NYC is becoming a quality-of-life nightmare. Gone are the days of neighborhood improvement under mayors Giuliani and Bloomberg, as the city is once again becoming a cesspool of all that drives decent people away. (Mayor Bloomberg  promoted stop and frisk policing and surveillance of mosques, and hired Ray Kelly as Police Commissioner -- all of which liberals harshly criticized, and all of which de Blasio scrapped -- yet it did the job.)

Those who do not live in New York are probably unaware of the recent dramatic uptick in street crime. This past Friday, two people slashed a 54-year-old man in the face in midtown Manhattan. That same day and 10 blocks away from this incident, a homeless man seriously assaulted two people while another homeless man chocked and violently robbed someone in an upscale Manhattan restaurant, and in lower Manhattan someone was thrown into the subway tracks and almost killed. Violent subway attacks have occurred as of late in Brooklyn as well. Residents are on edge, as horrific assaults have become more of a present reality than a thing of the past.  Those of us who take the subways and trek through the city each day on our way to and from work are not at all surprised, as the safety landscape has seismically changed for the worse over the past several years, and nice neighborhoods are again becoming rough and ugly. We are now used to being accosted by (often aggressive) beggars, and we rarely see transit police on subway platforms and in the trains. This was not at all the case prior to de Blasio.
The New York Daily News reported on the impact of the proliferation of homeless people in NYC on local residents:
Verbal harassment and physical assaults; stoops used as bathrooms; outdoor flowerpots used to hide knives; prostitution and drug dealing; newly arrived gentrifiers unable to tell the difference between some longtime homeowners and shelter residents; real estate brokers warning that property values fall when new shelters are announced nearby; and a pastor who lost half his congregation after a parishioner was raped by homeless youths from a nearby shelter.
We recently read of a sorry situation following a string of brutal attacks at NYC bodegas:
Lara and the United Bodegas of America, which says it has roughly 100 members, are now calling on cops to install panic buttons inside city delis, train workers on how to use stun guns and allow qualified workers to obtain pistol permits for use on premises.
?People from the community run to us for help,? said the group?s president, Radhames Rodriguez, 55, during a rally held outside Lara?s bodega Sunday. ?They run into our stores begging for help. We are putting our lives in danger, too. We need the tools to defend them and ourselves.?
Lara says he tried in 1992 to obtain a pistol permit but was told he could only use the gun for two hours a day -- going to and from the bank. ?Make it easier for the people who qualify to get a gun,? Lara urged the NYPD.
The NYPD did not return a request for comment.
De Blasio has emasculated the police department. This mayor?s ?progressive? policies have caused an explosion of homelessness, reduced quality of life, and enabled savage street crime. In fact, residents in the area where the most vicious street crimes occurred directly blame the crime on homeless people and drug dealers -- two groups that were basically set loose on the local population, courtesy of de Blasio.
In his own curious and naive way, I think that de Blasio means well -- but meaning well and acting well are often at odds. Leniency and love are not what?s needed; tough love (such as Workfare), and downright toughness against evil, are missing and are sorely necessary. Reducing the NYC jail population and criminal sentences, for example, is the wrong way to go.
The Talmud teaches that one who acts with mercy toward the cruel is in truth causing cruelty to those who are merciful. Bill De Blasio would do well to heed this sage advice.  UNQUOTE.

TIME TO DUMP VANCE....THIS IS OUTRAGEOUS.....
Vagrants not charged for wild subway melee with cop

By Joe Marino and Ben Feuerherd

The bums get a break for Christmas.

Five vagrants who sparred with an NYPD officer during a wild melee in a Manhattan subway station were released on Monday night without charges.

The five homeless men, who flailed at the officer in a fracas caught on video, were rounded up at the same Chinatown subway station were the altercation occurred.


Three of the drifters were released from NYPD?s Transit District 4 on Monday.

Two others ? Juan Nu?ez and Eliseo Alvarez Santos ? were taken to Manhattan Criminal Court where the District Attorney declined charges.

The 47-second clip of the fracas shows the uniformed police officer yelling at the group to ?stand back? on an F-train platform in the East Broadway station on Sunday night.

The cop was brandishing a collapsible police baton and ended up kicking two of the homeless men as they approached him, the video shows.

Two other men try to hold the group back from the cop, but one of the homeless men ducks underneath his arm, loses his footing and tumbles off the platform and onto the train tracks.

The NYPD said the cop was manning a solo foot post in the station when a woman told him that she had been harassed at around 10:30 p.m. 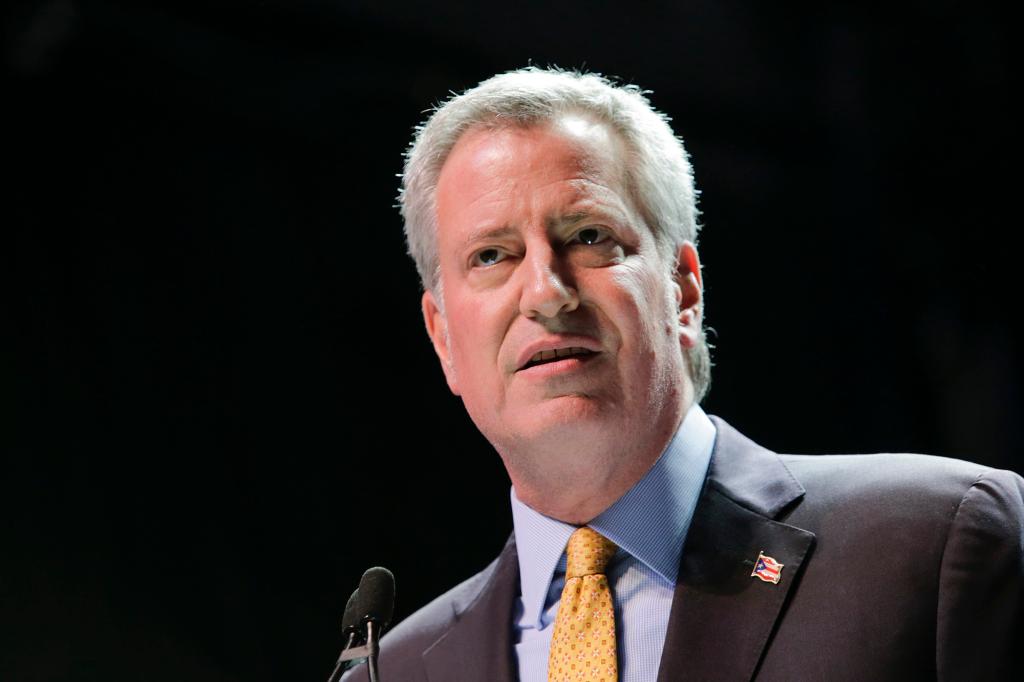 What the nation ought to know about Bill de Blasio

Mayor Bill de Blasio gave his sixth State of the City address Thursday, and he conjured an image of a revolutionary leader prying money from terrified billionaires. That’s because, in a Democratic …