Must have been somebody important, to rate a Lincoln chief's car.
Click to expand...

"Frank J. Quayle, Jr. was born on May 18, 1892 in Brooklyn, New York. His father, Frank J. Quayle, Sr. was a Captain in the FDNY having joined in 1888. From early in his career, Frank Jr. was very active politically, particularly in his home borough of Brooklyn. A lawyer by training, he represented the district at the Democratic National Conventions of 1932 and 1936. He was elected Sheriff of Kings County in 1934 and was named Postmaster of Brooklyn in 1940. In 1939 he launched an unsuccessful campaign for Brooklyn Borough President.

During the First World War, Mr. Quayle served as a Lieutenant in France with the 52nd Field Artillery and was awarded the Distinguished Service Medal.

Mayor William O'Dwyer appointed Frank Quayle to the post of Fire Commissioner on January 1, 1946. Immediately upon taking office, he abolished the 24-hour workday and won the gratitude of the Uniformed Firemen's Association. He oversaw the post-war boom of New York and the expansion of the fire department during that time.

Perhaps one of the most notable actions taken by Commissioner Quayle was to oversee the creation of the position of Chief of Staff and Operations in December 1946. When he was appointed, the office of Chief of Department was vacant. The Mayor had a strong personal friendship with Deputy Chief Frank Murphy and wanted Chief Murphy to have command of the Uniformed Force. Legislative and political wrangling ensued and Chief Murphy gained the position. When Commissioner Monaghan was appointed after Commissioner Quayle resigned, he abolished the position within one month of taking office.

- from Find a Grave
H

"MOBIL station . . . that gave PLAID stamps! Who remembers them?"  - raybrag

Great Stuff !  8)
I think about half of my childhood wardrobe & school supplies were Thanks to Plaid Stamps from 'The A&P', [Flatbush & 'P'],
& S&H Greenstamps from King Kullen on Tilden Ave.  (anyone ... ?) Dad worked out of NY Teleco. on Tilden 21 Yr.s,
Rest In Peace. Every Payday (Thurs.) we all meet Dad @ Duggan's Tavern & Mom, (Rest In Peace), dragged him off to King Kullen.

Found this in another group:  Chief of the Fire Patrol, 1948 Buick (Gary Urbanowicz photo):

The tool box on the running board just behind the chauffeur's seat was where the chauffeur stored his helmet, turnout coat and boots. The box at the very end of the rig was where the portable generator was stored. I guess it varied but that's how it was on L130's rig back in the day.
8

Looks like Fordham Landing along the harlem river north of Fordham Rd. Butler Lumber can be seen in back of 46.
G 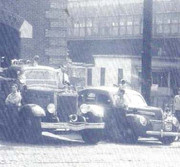 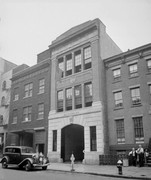 3511 said:
G-Man, as always, is correct. Some of the late 1930's Ahrens Fox distinctive pumpers hung around until replaced by the 58-59 CF Mack's. After 1956, however, they were no longer front line pieces,  mostly used as hose wagons or other second (reserve) pieces.

The design for the '58/59 CF Mack was originally done by Ahrens Fox. The prototype was produced circa 1954/55, but the company went into receivership and Mack bought the design.

Ahrens Fox would have replaced its stalwart model of the late 1930's with a massive contract if they had only been able to hang on for a few years.

After WWII, the FDNY decided to purchase 750GPM pumpers. There were a lot available on the cheap as military surplus. The 1000GPM's of the 1930's ( Seagaves', Mack's, Ahrens Fox', Ward LaFrance') were retired from front line service during the 1950's. But their value as larger capacity pumpers kept them around as second pieces  for a number of years. Example: E88's 1936 Mack 1000GPM pumper served at E2 on the West Side from 1953 until the late 50's as a pumper/hose wagon.
Click to expand...

Pardon me for bringing this forward from p 13. In the late 50's Mack bought Beck Bus, model C 85. Mack put the effort into making fire apparatus instead of busses, this was followed by the CF Series. Notice the similar styles...

Came across this photo...

I saw this photo, I am interested about the rig. When I was a young lad in Canarsie, I saw this type of rig responding down Rockaway Pkwy, I noticed the high windshield, the canvas covering. I know the photo doesn't show much, but maybe one of you eagle eyed detectives can identify the make and model of this war horse...thanks!